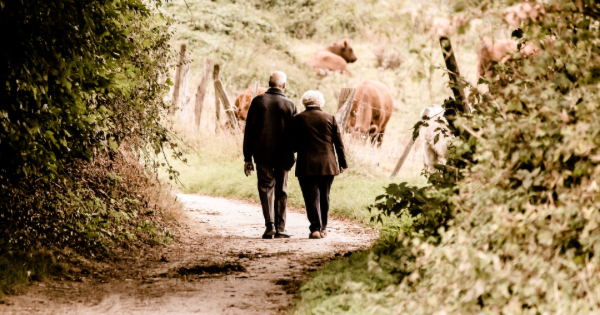 Maintaining good health is a goal that nearly every person prioritizes in one way or another. Some invest in the global wellness market — which was worth a whopping $52.5 billion in 2019 — by getting acupuncture and massage treatments and others purchase pricey gym memberships to stay fit.

According to a recent study published in JAMA Internal Medicine, you don’t have to spend your hard-earned money to live a longer life. You just have to walk.

Researchers from Brigham and Women’s Hospital conducted this study to examine whether the number of steps older women walked every day had an influence on their long-term health. The outcomes of the study revealed that walking as few as 4,400 steps per day was associated with a lower risk of death when compared with taking just 2,700 steps a day. The risk of death for the study’s participants continued to decrease as they walked more steps each day, but leveled off at about 7,500 steps per day.

A professor of medicine at Harvard University, I-Min Lee, led this study by examining data from the Women’s Health Study. This vast collection of information has been tracking the habits and health of older women for decades. With estimations projecting that about 20% of the U.S. population will be over the age of 65 by 2030, this information has proven to be more valuable than ever before. In the case of this study, it gave Dr. Lee and her colleagues the objective data they needed to observe the impact of a person’s number of daily steps on their life expectancy.

Dr. Lee and her colleagues gathered the health data and step count from nearly 17,000 participants of the Women’s Health Study. A majority of the women were in their 70s and none of them had reported poor health. The researchers then looked at death records for the following four to five years and compared these mortality rates to the women’s step counts.

Women who walked that sweet spot of 4,400 steps per day were about 40% less likely to have died during the follow-up period than those who took 2,700 steps every day.

“We were quite surprised that such a relatively small number of steps would be associated with such a substantial reduction in mortality,” Dr. Lee said of the results.

This slight difference in activity levels has long proven to make a major impact on the lives of people at any age. For instance, adolescents who play sports are eight times as likely to be active at the age of 24 as adolescents who never played sports. This statistic and the findings of Dr. Lee’s study indicate that the average person may not need to meet the intimidatingly high recommendation of 10,000 steps per day to stay healthy. Rather, a small increase in physical activity can lead to a healthier life.

Dr. Lee does warn that due to the observational nature of the study, they cannot definitively say that walking more steps every day will lower mortality for older women. The researchers were unable to completely control for the discrepancy that women who were in better health might be walking more and those who were ill or weak may have been the ones who walked less and died earlier.

Despite these factors, Dr. Lee maintains that their findings suggest that counting steps is an effective way of measuring exercise and that walking more steps is better than walking fewer.

In other studies, researchers have been able to find more connections between walking and good health. A study from the American Cancer Society found that women who walked at least seven hours a week had a 14% lower risk of developing breast cancer than women who walked three hours or fewer in a week’s time. Studies have even found that walking more can reduce a person’s craving for sugary treats and lower the number of sweets they eat.

Another important benefit of walking is its ability to boost the effectiveness of the immune system. In a study of more than 1,000 men and women, those who walked at least 20 minutes a day for 5 days per week had 43% fewer sick days than those who exercised once a week or less. The regular walkers who did get sick had milder symptoms and were ill for a shorter period of time than the average 10 days it takes to make a full recovery from the common cold.

For her study, Dr. Lee hoped to give people a more concrete way of measuring their physical activity by measuring steps rather than the length of time spent exercising. United States health guidelines recommend getting 150 minutes of moderate exercise per week, but that strange number can be difficult for people to practically apply to their schedules. As just one in three adults receive the recommended amount of physical activity every week, Dr. Lee also wanted to provide evidence that people don’t have to reach an intimidating number of steps every day in order to be healthy.

“Clearly, even a modest number of steps was related to lower mortality rate among these older women. We hope these findings provide encouragement for individuals for whom 10,000 steps a day may seem unattainable,” said Dr. Lee.