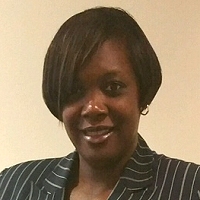 Kaleda Carthran was born in the city of Wrightsville, Georgia in 1972.
Having that small southern town upbringing could only keep her hidden from
the rest of the world for so long. After spending her early days playing
with cousins and friends she began to mature and finally got out of there
and joined the military. She left her daughter that she had at a young age
in the care of her mother with hopes of creating a better Kaleda for her
children’s sake. The tiny walls of Wrightsville were not big enough to hold
her back from seeing a much faster paced life and meeting many great
people along the way. She met her soon-to-be husband while stationed in
Ft. Hood, Texas and they had a daughter together and then began raising a
family. It was in raising this family that many trials and
tribulations came along and tested their marriage and well-being. Through
it all her husband and her began going to church and putting all the bad
things that plagued their marriage behind them. She has always strive to
be better at everything she does and now she is striving to become an
excellent writer. She writes about things that tug at her own heart
strings and things that make a difference in others around her. She
currently resides in Texas with her now larger family and keeps
writing about topics that really hit home to many people.